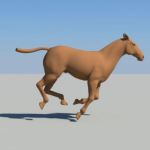 One of the first assignments we were set this year was animation. We were given the option of 3 different briefs; creature animation, character interaction or submitting in the november 11 second club competition. Initially I wanted to pick the 11 Second club brief as it would have been really fun seeing what other people created with a different viewpoint on the audio. However, november’s audio didn’t fit well to the brief we were set, and so I picked the ‘creature animation’ brief. The specs of the brief stated that we must use a quadraped, which was a real challenge as I had not animated a quadraped prior to this.

During this assignment, I overcame some problems that slowed down my work process. One of which was the lack of an onion skinning tool. Whilst there are a few online tools, none that I found created transparent copies of the original mesh (similar to the tool found in Modo). Left to my own devices, I set off to create my own onion skinning tool. I was really pleased with the results and it helped to speed up my workflow. I was able to see the arcs, and iron out the occasional ‘pop’. Fantastic. I wanted to share this with my collegues, so I created a gui and passed it around. I got some great feedback and it was really satisfying to see people use a tool that I created speeding up their workflow.