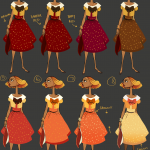 So final major project has been underway since September. For the first few months we worked to solidify the narrative, as we would not have the chance to go back and revise this once we started the production of assets and characters. This was a really important part of the process as the story that we have now is far, far better than what we had at the start. The original idea (pitched by Letty Murray-Tyson) was a vfx piece, based around the idea of animal metaphors; e.g. frog in your throat, butterflies in your stomach. Something that we wanted to take literally and present visually. Due to complications and university guidance, this had to be changed. We now have a fully cg-animated narrative, the focus is now centrally based around a love story between the personified sun and moon who pass each other every day on a staircase – dawn and dusk. The characters still have the animal idiom of ‘butterflies in your stomach’ which appear periodically after they see each other however all other animal metaphors have been cut.

Paris Jones (our concept artist of the team) http://paristaylorjones.carbonmade.com/ has produced some absolutely incredible designs for both characters and environment.

We really wanted to capture a certain radience with the female design in order to help convey the image of the sun. We made her a slightly darker complexion in order to compliment the brighter colours. The design of the male (moon) we gave a slightly curved face and blue/silvery clothes.